It’s taken me a long time to get the hang of flash photography. Ambient light, natural light like a late-afternoon sun and artificial lighting for bands has always been easy for me. I remember one of the wedding photographers I assisted last year, Joshua Hoffine, telling me it took him over a year to get the hang of flash photography and off-camera lighting, and I realized it’s taken me something like 15 or 16 months to really begin to feel I had a consistent grasp of it.

Note, I say “consistency”. I’ve always been able to get one or two “lucky” shots out of dozens as I tried my luck with off camera flash and radio slaves. But getting the same results every time was elusive. And I felt it was critical to advancing my skills.

For a couple of the weddings I shot this fall I went with Canon’s flash system, with a Canon Speedlite 580 mounted on the camera triggering my Canon Speedlite 430 off-camera. The results were promising and definitely convenient. I even considered selling my Pocket Wizards. But then I found “her”… 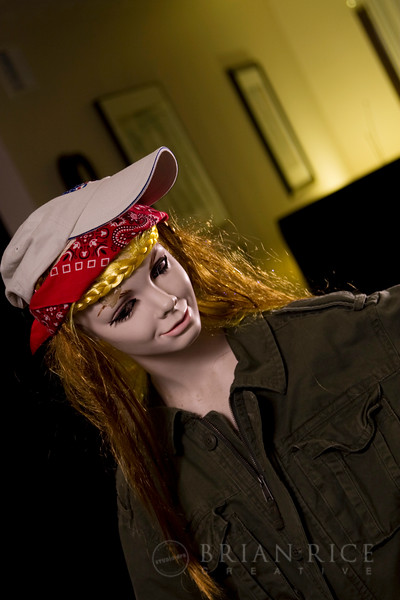 I always remembered another thing Joshua told me: He practiced his lighting skills on a mannequin. I very briefly considered buying one until I discovered how expensive they are; a good one can cost $400 plus. So I shelved that idea until last month, when I was driving home one night I noticed someone in my neighborhood was actually throwing out a mannequin for the garbage truck to take away.

I hesitated as I kept driving home, then thought, what the hell. I circled around and went back, and asked the owner if they were tossing out the mannequin and he said to go ahead and take it. Crazy.

Of course that wasn’t enough. After a few test shots I quickly realized I needed to dress up the mannequin and to find a wig to complete it. So after doing that, the other week I finally set out to start practicing my lighting, and with the pocket wizards.

In the course of one week of shooting for a couple hours a night I went from, say, Level 2 to Level 7 as far as beginning to grasp what I was doing, and more importantly, getting consistency. Setting my flashes, accounting for the distance, ISO, gels, etc…and getting the same result over and over again…the way I intended when I set up the shot. It was immense. Before I used to just set the timer and run into the shot to be the practice subject, which took forever. And using a mannequin was a lot better than even having someone just stand there while I practice because you don’t have to worry about them getting impatient.

So with the shot above, you can see the key light illuminating her Rembrandt style (light positioned 45 degrees from where she’s facing. I think that’s the official term), and another light outlining her from behind her and to the right. I’d call that the backlight but I’m not employing it the way I’ve seen online, with it lighting a backdrop directly behind the subject. Slow shutter speed, about 1/25th or 1/30th, and 400 ISO to pick up the background. What I really love about the results is how the “backlight” (for lack of a better term) outlines the shape of her face on her left (not to mention the wig). In my next blog I’ll show the results with a “live” human subject. 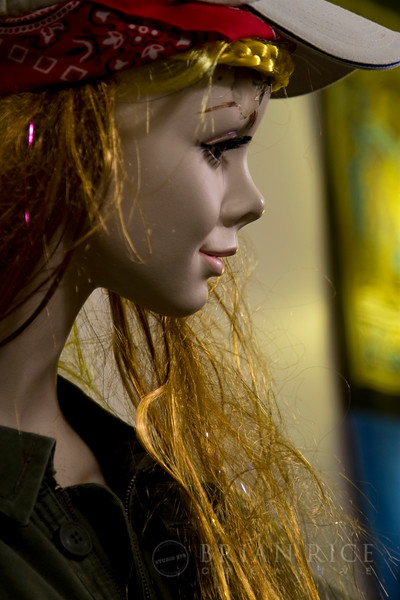 So I guess the moral of the story is, if you want to practicing lighting with off-camera strobes/flash/whatever…find yourself a mannequin. Be prepared for people to look at you weird and say “that’s creepy” when you try to explain it to them, however…

← Welcome to Wherever You Are
Anatomy of a Photo →