It’s been a while since the last post. I had meant to do a follow up on Jimmy Jam, but over the course of time did not get around to it. It was a great experience and seeing so many great bands who are all my friends jam together at the same time was fantastic. Everyone involved loved it so much that all the bands signed on to do it again later this summer at another venue (although not necessarily as a benefit for Jim per se, but as another All Star Band Show). 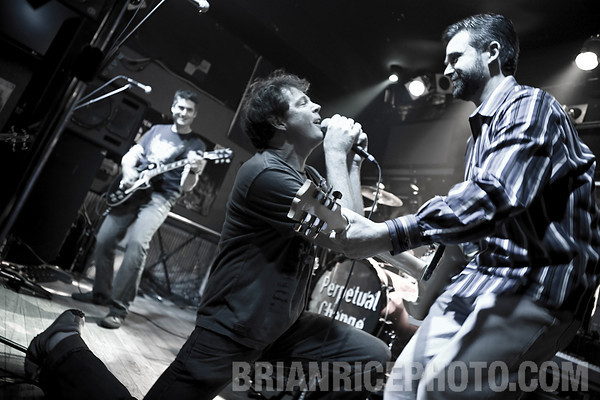 (Above: David, background; Bill, kneeling; Jim–the man of the hour–one being knelt to.)
So I shot the entire event and the photos were great. The gallery can be viewed here. Originally the idea was that I was going to donate all the proceeds from print orders from this event to Jim. And I was going to push–hard–to motivate and get people to order said prints. But then in emailing Jim on the subject he insisted that I did not need to donate any profits to him but instead to consider it in trade for a proper photo shoot of the band. Which put me in something of a bind because it wasn’t an empty gesture I was making to donate the profits and make myself look good.

It also took the steam out of the campaign I was planning to promote print orders; saying the profits would go in trade for a photo shoot of the band isn’t nearly as compelling as donating the money to Jim and his family. So the whole thing kind of stalled.

But I’m not complaining or in any way intending to express any negative vibes. I’m simply laying out a conundrum I’ve encountered as a quasi-hobbyist-freelancer-wannabe-pro-in-training. I want to make a sincere gesture and legitimately contribute to helping Jim out, but he has a good solution to dealing with it, and one that plays precisely into my efforts to hone my studio lighting/posed photography pretentions/ambitions. (And considering I hadn’t pushed the print sales, there is very little on the money side at this point, anyway.)

But anyway, all that aside, it was truly a great night for everyone involved and Jim was extraordinarily touched by everyone’s support. I felt great to be a part of it and capture the event.