Last night I shot an original band called Shots Fired, who were playing a reunion show at the Record Bar in Kansas City. It was a rare case where I was able to set up my so-called lighting rig in order to take some group shots with off camera lighting. Typically bands don’t have time to sit down for more formal shoots, or rather they are all off individually wandering around, mingling, etc — “herding cats” is the term I’ve heard applied — and it’s maddeningly frustrating to corral them all for a shot. It was also a rare case where I’ve shot an original band.

One of the conditions I insisted on/begged for when I agreed to shoot was that I have time with the whole band before the show so I could work with my rig. My rig is basically two umbrellas on stands. A 32″ umbrella which I chose to be my key light since it seemed to focus the light more tightly, and a 42″ I used for my back/edge light in some of the shots. The 42″ was going to be my key light but it seemed to throw way too much light all over the place so I switched it. I’m still not sure it’s right for edge/backing light due to its massive size (and unfortunate tendency for me to capture it in the background of some of the pics), but it’s what I brought, so I dealt with it.

Now, I was going to shoot with my 580 Speedlite on-camera, activating my 430 on the key light, at least for the first set of shots with the band seated on the couch (which was going to just have one light): 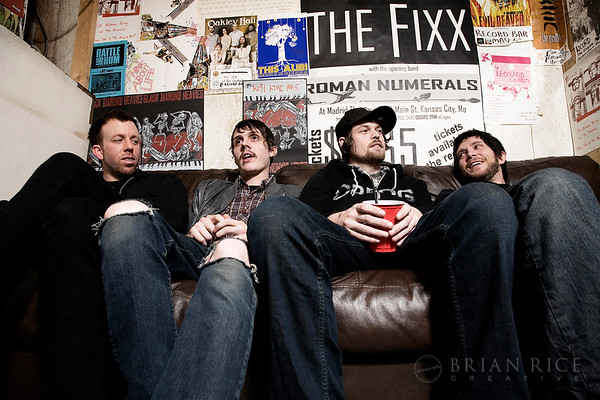 And then afterward, for the individual band member shots I was going to switch to my Pocket Wizards and have both flashes off camera: 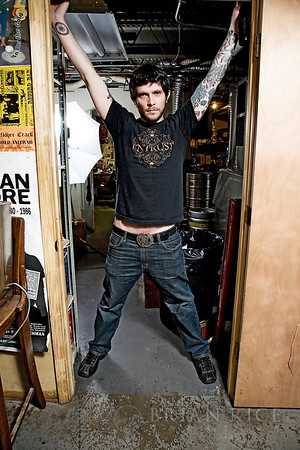 So anyway, I realized it made no sense to use the 580 on-camera to start with, only to switch everything out after the first set of shots while the band was standing around waiting (cats, you see). Luckily I had a few moments before the band arrived (not to mention smart that I got there early enough to scout the room and plan how I was going to shoot it) so I switched out my gear at that point, putting the 580 on the umbrella and attaching the Pocket Wizards, etc. I guess I should have used the 580 as my key light and the 430 as my edge light since the 580 is more powerful, but the 430 was already on the umbrella stand with the 32″ umbrella, and since I wasn’t shooting at full power on either flash anyway, I guess it wasn’t necessary.

So the band arrive and we start working, then we switch over to the individual shots with the back lighting (and my umbrella making a guest appearance), when the band members decide to make my original individual shots into another imprompu group shot: 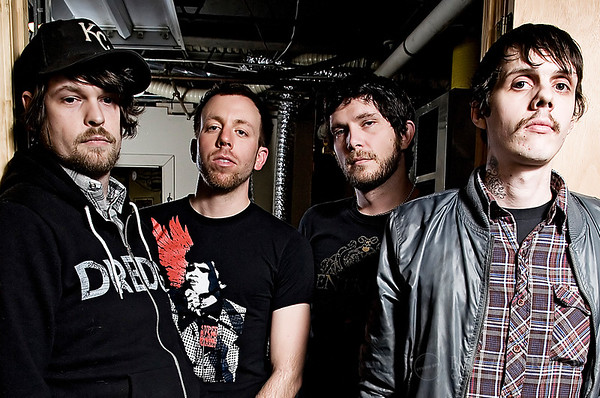 And so this is where it all really comes together. One thing about bands is that they know how to mug for the camera. Especially bands who have made records and done photo shoots before. And they’re inherently photogenic, which makes it easier on me. Now the best part about this last photo is how well the edge lighting works in relation to the key light (main light coming from behind the camera-right). Note the way the edge light outlines the right side of Zach and Billy’s faces (the two in the middle). And the way that edge lighting segways into the hard edge of shadow which then gradiates into the key light is a look I have been developing ever since I got into off-camera lighting: 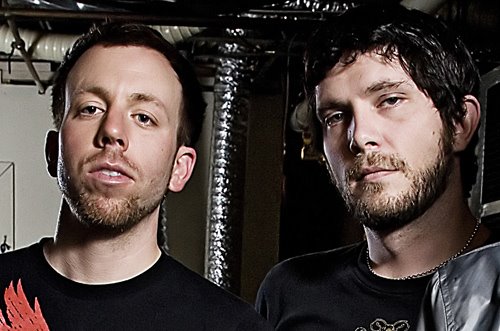 For full-time pro photographers who do this sort of thing for a living it’s old hat, but for me to achieve this in a PLANNED setting, and not a happy/lucky accident where I was just winging it and hoping, was a breakthrough for me. I planned it, set it up, tweaked the power settings on the flashes as we shot, and nailed it.

As for settings, for the group shots I was in the f8.0 to f11.0 range in order to maximize the depth of field. For the couch shots where they were up against the wall, I saw no need for a narrow depth of field, although on the individual shots in the doorway I turned it down to 4.0 (the max my 24-105mm goes) to get some bokeh in the background. 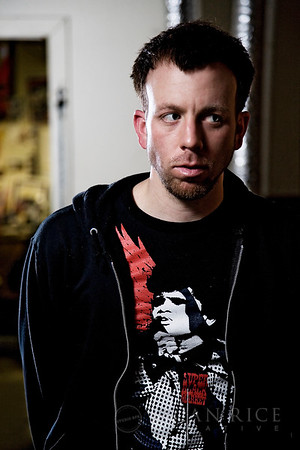 Shutter speed I kept in the 1/30th second range to pick up the background, shadow areas. The image stabilization on the 24-105 helps out there. ISO in the 400-800 range for the same reason (noise is not an issue at that range on the 5D). The power settings on the flashes were about 1/4th to 1/16th on the 430 Speedlite at 28mm and about 1/8th on the 580 at 24mm (the 580 being the more powerful flash I need the 430 at a higher mm setting in order to line up their guide numbers so they are starting from the same baseline). Unfortunately I don’t have the time to write down each setting for each shot, obviously, as I’m tweaking the power settings while I shoot, but that’s about the range I’m working in. I also amped up the contrast in Photoshop afterward.

What pleases me the most about the shoot was how I was able to make everything work the way I wanted it to, and not flail around hoping something stuck to the wall. There’ve been many shoots with off-camera lighting where I didn’t truly understand what I was doing but somehow I’d always get lucky on a couple shots. That was encouraging in the beginning because it showed I wasn’t totally clueless, but the control and consistency wasn’t there.

Here is an example of a pic I took the very first night I owned my off-camera lighting rig, with another original band, Leaded: 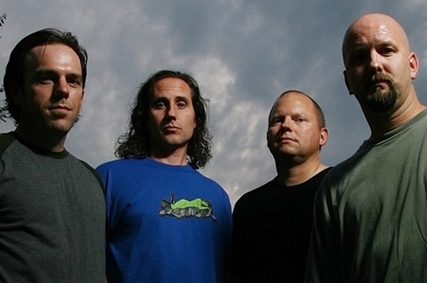 Didn’t know what I was doing, just winging it based off what I had read about power settings, etc. Not too bad, but it’s great knowing I know how to take this shot without desperately flailing about anymore.