Some things never change. Look at this text from a handbill about the President that’s made the rounds:

THIS MAN is wanted for treasonous activities against the United States:

1. Betraying the Constitution (which he swore to uphold): He is turning the sovereignty of the U.S. over to the socialist-controlled United Nations. He is betraying our friends and befriending our enemies.

2. He has been WRONG on innumerable issues affecting the security of the U.S.

3. He has been lax in enforcing laws.

4. He has given support and encouragement to racial riots.

5. He has illegally invaded a sovereign American State with federal troops.

7. He has been caught in fantastic LIES to the American people (including personal ones like his religion)

Man, they really do NOT like President Obama, huh?

Only, that’s not a bill directed at President Obama: that was from a handbill circulated in Dallas just days before President John F. Kennedy was assassinated: 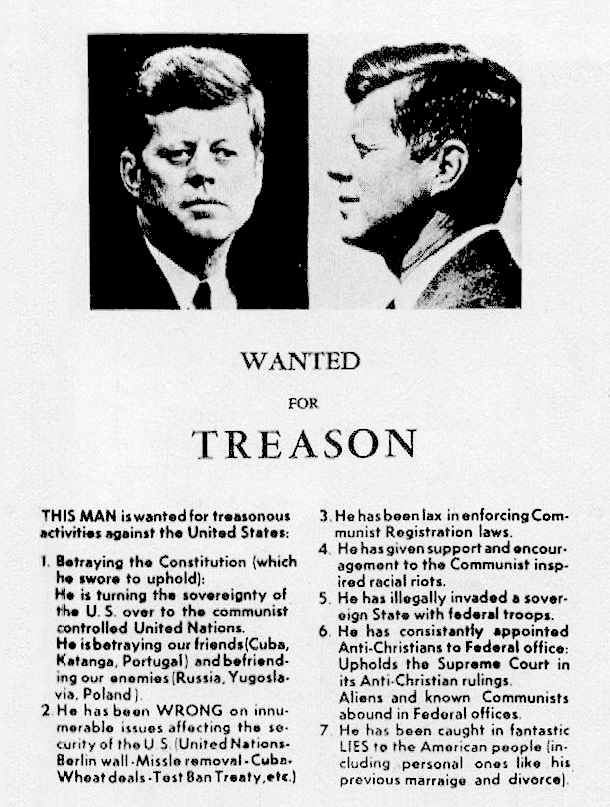 Yes, I did a bait and switch! It is incredible just how little the language has changed in the 50-plus years since JFK was president, and how visceral it was even then. I admittedly altered some of the details in my initial text above to reflect contemporary realities today, but it didn’t require very much to make it easily apply to Obama. I had been thinking about how different it is today, and how the level of hatred towards the President is more visceral and worse than ever before, but then I remembered this handbill from 52 years ago, and how eerily similar it is to some of the things that are alleged today about President Obama.

What to make of it? Opposition to the President has obviously carried the same apocalyptic language in years past as it does today. And the Right (in this example, since both Presidents here are Democrats) definitely goes to the same well over and over. I’m sure there’s similar examples about Bill Clinton. And honestly, I think the Left has their own well that they mine whenever there’s a Republican in office; substituting words like “fascist” for “socialist”, for example. I remember having a liberal friend who was convinced George W. Bush was going to declare himself emperor just like Palpatine did in the Star Wars prequels!

I do think the age of social media and the internet has polarized people even more, unfortunately. Everybody is able to access and isolate themselves among newsgroups or websites that reflect and confirm their worldview, and be able to live in an echo chamber where everybody is shouting the same things to each other to such a degree that anybody that doesn’t agree with them is the “other”, and against the American way of life. I have to admit, I worry that I’m guilty of that myself, especially as a result of online debates/arguments in recent months in response to current events. I sense that’s frayed some of my friendships, especially in the days after Paris, and yet it’s been hard to disengage; even this post is an example me baiting people on the Right. But I like to believe I’m trying to make people stop and think.